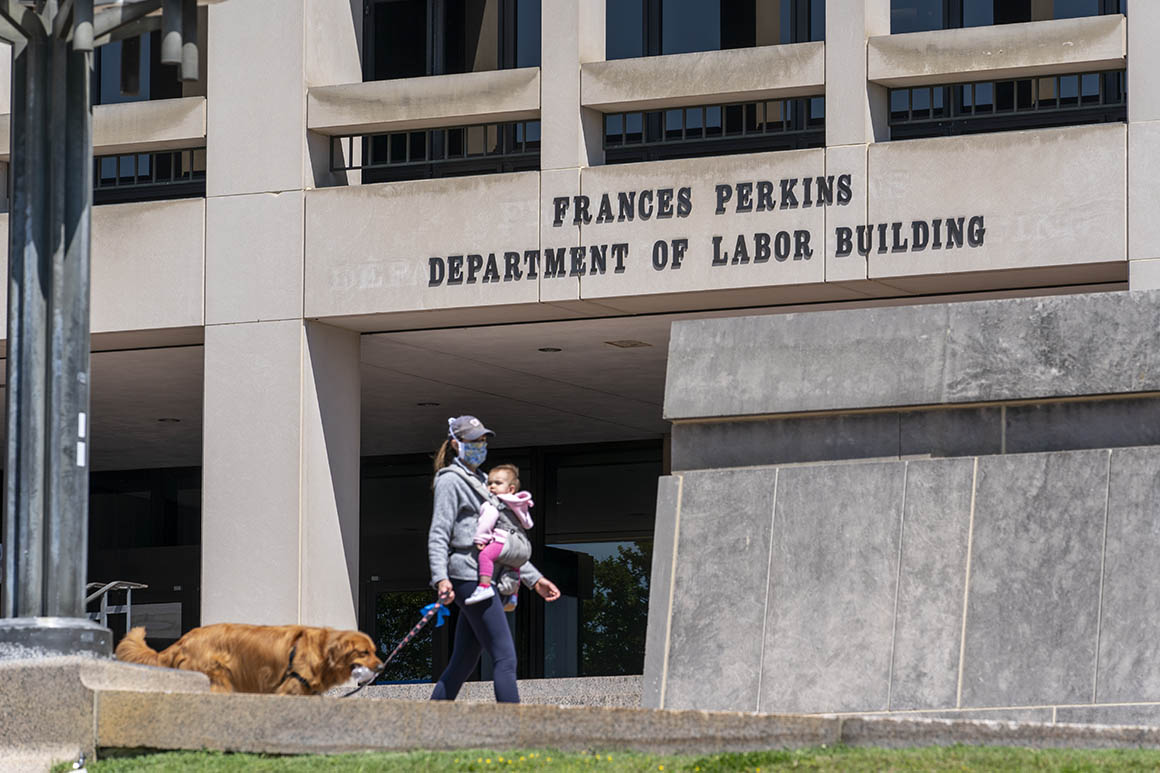 The U.S. economy is sitting in its deepest hole since the Great Depression, with more than 33 million Americans losing their jobs in just seven weeks and an unemployment rate likely to top 20 percent this year under the weight of the coronavirus pandemic.

And it’s likely to take years — perhaps much of the next decade — to dig out.

President Donald Trump is agitating for a rapid reopening of the U.S. economy to help reverse the damage quickly, hoping a swift bounce back would boost his reelection prospects in November. But the recovery is likely to be weighed down by severe damage to the private sector and a resistance to returning to the old normal, keeping the jobless rate still near 10 percent — the high of the Great Recession — by the end of 2021, a year into the next presidential term in office.

The April jobs report, to be released by the Labor Department on Friday at 8:30 a.m., will offer new details about the mounting devastation across the labor market, already previewed in off-the-charts weekly filings for jobless claims. But the full scale of the downturn is not yet clear.

Recent moves across the U.S. to roll back measures enacted to slow the spread of the deadly Covid-19 outbreak could backfire and make the economic decline longer and worse — putting some states on course for deepening economic turmoil into the summer. Polls continue to show Americans deeply uncomfortable with going back to anything resembling normal life. And they overwhelmingly fear fresh outbreaks, putting a lid on a significant recovery in consumer spending — let alone the rehiring it would eventually support — until much more virus testing and treatment is available.

“We have to be utterly realistic about this because there is political fantasy out there and then there is economic reality,” said Joseph Brusuelas, chief economist at consulting firm RSM. “It is going to be years before we recover all of these lost jobs and as much as 25 percent of them aren’t ever coming back.”

Brusuelas added that the “next step is to discover if we suffered a fundamental economic break that is permanent. And it would appear the answer to that is yes.”

The Congressional Budget Office, which produces nonpartisan research on economic and fiscal conditions, projects that while the jobless rate will start declining by the fourth quarter of this year, it will remain at 9.5 percent at the end of 2021 and that 6 million people will have exited the labor force entirely by then. During the Great Recession sparked by the global financial crisis, unemployment peaked at 10 percent in October 2009.

Numerous factors could impede a rapid decline in joblessness, led by the sheer breadth of job cuts now spreading across nearly every American industry. Layoffs and furloughs began in giant sectors: the travel and hotel industries as airplanes and convention halls emptied out, and consumer-facing industries such as retailers, movie theaters, bars and restaurants that had to close down. That left most of the country hunkered down at home and venturing out only for groceries, medical needs or the occasional walk in the park.

More recently, evidence from ADP’s report on private payrolls for April and surveys of the manufacturing and service sectors suggest jobs cuts are now spreading into higher-paid positions in goods production and business services. The oil and gas industry is hemorrhaging jobs amid a historic collapse in oil prices.

Some of the retail jobs are clearly not coming back. Iconic high-end department store Neiman Marcus filed for bankruptcy protection on Thursday. J.Crew filed earlier this week. And concerns are rising over the viability of Lord + Taylor, JCPenney and numerous other retailers.

In some ways, the Covid-19 crisis compressed what could have been several years of shifts to online retailers such as Amazon and Overstock into a period of weeks, meaning employees in many brick-and-mortar stores may need to retrain for new occupations.

Companies coming out of the crisis may also accelerate their reliance on technology to replace staff and reduce the amount of office space they need, slowing job gains and hurting the commercial real estate industry.

These shifts were long anticipated and the subject of extensive research, high-end panels and seminars on reskilling the American labor force.

But most of the actual work remains undone. And now it’s suddenly and desperately needed.

“It’s going to take years to get these jobs back and many are never coming back,” said economist Megan Greene, a fellow at Harvard’s Kennedy School of Government. “Industries writ large are going to have trouble reopening and others are going to figure out how to use technology to limit the number of people they rehire. This crisis has just accelerated all of these trends.”

“None of them ever really got any of the spoils,” she said. The wipeout in low-wage jobs could produce an odd quirk in the April jobs report out Friday morning: a spike in average hourly earnings that would come for the worst possible reason.

The latest ADP report on job losses showed the largest cuts came in leisure and hospitality at 8.6 million workers, followed by trade, transportation and utilities at 3.4 million. But it also showed losses in construction (2.5 million) and manufacturing (1.6 million) that have likely accelerated in recent weeks.

The latest closely tracked gauge of manufacturing activity from the Institute for Supply Management fell to 41.5 in April, the lowest reading in 11 years and an indication the sector is shrinking severely. The sub-indexes were much worse than the headline reading — which got a boost from inventory numbers — with the employment gauge dropping to 27.1, down 16.3 points in a single month.

The oil and gas industry, which employs around 150,000 Americans directly but supports millions more jobs, according to the American Petroleum Institute, is cratering under low oil prices with a wave of bankruptcy filings just starting to get underway and the White House still scrambling over how to intervene.

Some environmentalists hail the cleaner air and the hits to the fossil fuel sector created by the coronavirus crisis. But even most liberals’ plans for a transition to cleaner energy sought to avoid wiping out current well-paid jobs without a plan for transitioning people to different kinds of work. None of those plans are in place.

And economists suggest that, as with retail, many of the oil and gas jobs will be vaporized — lengthening the time it will take to bring down overall unemployment.

“It will take until mid-decade before the economy is back to something considered full-employment — a 4 percent to 5 percent unemployment rate,” said Mark Zandi, chief economist at Moody’s Analytics.

While unemployment may fall quickly this summer as businesses reopen, Zandi said, it’ll be “a slog for the economy as we grapple with a potential second wave of infections. The economy won’t kick into any kind of gear until there is a widely distributed vaccine.”

Trump himself has mostly pivoted away from a focus on testing and treating the virus to one centered on what he has promised will be a “spectacular” and “tremendous” economic rebound. But some of his advisers offer more sober viewpoints.

“The jobs numbers are very, very chilling and I think that it’s very important, you know, to let people understand in a very somber way that this is the biggest shock that our economy has ever seen,”said senior Trump adviser and conservative economist Kevin Hassett on Fox Business Network this week.

Economists mostly agree that the jobs report should turn positive by June if reopenings go well. But they mostly disagree about a rapid snapback.

That will be hard to achieve if stores, restaurants and bars remain half-full and Americans fear returning to malls, theaters, big sporting events and air travel.

Political intelligence on Washington and Wall Street — weekday mornings, in your inbox.

The Paycheck Protection Program has likely saved many small and midsize businesses, but many have already failed and millions are sputtering as the program runs short of funds and the smallest firms complain about inadequate access. The ADP report for April showed small businesses shed 6 million jobs in April. Many are of those are likely gone for good.

Airline, leisure and hospitality jobs could also be very slow to return. United Airlines this week warned that it would have to sharply reduce staffing in the coming months and that its management and administrative teams could be cut by 30 percent. Other carriers are expected to follow suit. Economists suggest it could be years before business and personal travel returns to levels seen before the crisis.

Economists also note that the coronavirus crisis has exposed structural problems with the U.S. economy that could take years to fix. “This has fallen disproportionately on workers with high school or less than high school education,” said Mary Daly, president of the Federal Reserve Bank of San Francisco, in an interview with POLITICO. “So when you think about coming out of this, it’s just another indication that we need to invest in human capital, we need to find ways to get people to have the skillset that allows them to work in jobs that are not so vulnerable to these types of shocks.”

That will not be a quick process. Fiscal support from Congress and easy money policies from the Federal Reserve will help. But even if people have some money in their pockets and can pay for rent and food, the economy cannot really reboot — and hiring can’t take off — without a stronger feeling of public safety.

“You could drop as much money on me as you want, but that doesn’t mean I’m going to go book a vacation and get on a plane,” said Greene.

For Trump and the White House, it means they may have to fight a reelection battle with numbers that may have bottomed out but not improved all that much. “The economic recovery will not be like a rocket ship, as the president likes to say,” said Zandi. “It will be more like a truck that got stuck in the mud — at least until there is a vaccine.”

END_OF_DOCUMENT_TOKEN_TO_BE_REPLACED

A bipartisan group of 24 U.S. senators sent a letter to President Trump urging him to uphold the Renewable Fuel Standard and reject oil...

END_OF_DOCUMENT_TOKEN_TO_BE_REPLACED

With oil prices depressed, China presides over a buyer’s market

WHEN OIL supply threatened to overwhelm storage tanks in Cushing, Oklahoma, in April, the pain was felt as far as Chongqing. Retail...